3rd Sunday of Easter: Jesus in the Eucharist 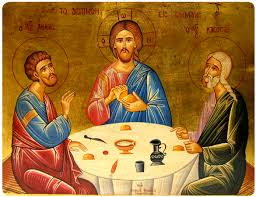 Today's readings tell us that Jesus is the one we should follow. It also gives us a glimpse of the Petrine office of Peter, the first pope.

The first reading begins with Peter taking a leadership role. He "stood up" and "raised his voice." This is important language to understand for us Catholics and our separated brothers and sisters in the faith. We see Peter as the leader here. He takes the role as the spokesman.  He tells the Jews about Jesus the Nazarene. This Jesus was commended by God with mighty deeds, wonders and signs.  Peter is telling the Jews that Jesus was the one sent by God and this was obvious via His works.  This Jesus was delivered up by a set plan God already knew.  Peter tells the Jews that Jesus was killed by them using lawless men. Let me clarify this a bit. This statement does not mean all of the Jews are responsible for Jesus' death. In reality, we all are. Yes, Jews were present screaming out "crucify Him," but not all Jews.  So we have to be careful with this verse and not use it to promote antisemitism. Unfortunately, there are some who call themselves "radical traditionalists" who have hate for Jews. I have read blogs where some have even stated that Jesus, Mary and the disciples were not Jews!  This is just ignorance that leads to silly and hateful rhetoric.  Anyhow, Peter tells the Jews about the importance of Jesus.  He cites David, who Jesus has direct lineage to.  Then He compares David to Jesus.  David was great, was blessed by God but died and his tomb still exists among them, he says. However, Jesus rose from the dead. His tomb is present, but it is empty.  So Peter is basically stating that David etc were all pointing to Christ. Christ is the one we should seek. Everything was fulfilled in Jesus Christ. This is why in the responsorial Psalm we respond, "Lord, you will show us the path of life."

Jesus is the way, only He. No one else saves. In Jesus we find salvation, completion and purpose. This is why we bless the Lord and ask Him to counsel us. The Lord should always be set before us. Oh, and what a way we can do this literally with the Holy Eucharist!  Jesus is literally set before us. No other religion can claim this honor. The Lord will give strengthen us and show us the path to life.  This path must be guided by strong morals which lead to holiness. The second reading reminds us that we must invoke God as Father.  Think about this for a moment. God is our Father!  The living real God who made the universe and everything is our Father. This is an entire reflection on its own! And what an awesome one! God who is impartial is our Father.  He will just us according to our works. So this is why we have to conduct ourselves with reverence, respect what was handed down by our ancestors which has been blessed by the blood of Christ. Christ who was known before the foundation of the world.

Lastly, the Gospel tells us about Jesus walking on the road to Emmaus. The walk was about seven miles. Two of the disciples are walking to Emmaus and Jesus gets close to them on their walk. They did not recognize Him at first. The two were discussing and debating the details surrounding the passion and resurrection. I can imagine that they were still in disbelief over what happened and probably wondering if it were all true. Did Jesus really die? Was He really the King of the Jews? Did Jesus really rise from the dead or was His body stolen? This would make sense considering the disciples were mere humans and still did not fully grasp everything. The Holy Spirit had not come upon them yet. As Jesus walked with them, He pretended He did not know what was going on or what they were debating. They responded, "Are you the only visitor who does not know of the things that have taken place there in these days?"  He asked, "What sort of things?"  They then told Him about Jesus the Nazarene, or himself and how He died and the tomb was empty.  They added the details of women seeing angels and what not at the site. Jesus then replied to them, "Oh, how foolish you are!  How slow of heart to believe all that the prophets spoke!  Was it not necessary that the Christ should suffer these things and enter into His glory?"  Jesus then gives them a Scripture lesson from the beginning of what Jesus as Messiah was all about.

Despite this, they still did not realize that Jesus was the one talking to them, though they did feel a burning within their hearts. It was not until they asked Him to stay with them and Jesus took bread, blessed it, broke it and gave it to them that they realized it was Jesus. He then vanished leaving them dumbfounded.  This is important to reflect on. Our Protestant friends adopted the error from Martin Luther regarding using Scripture alone. While the Bible is awesome and necessary, it is not the only thing we need or can use. Scripture is not enough. Notice how when Jesus speaks to the two disciples using Scripture, they did not know it was Jesus. The Scriptures on Jesus being told to them by Jesus did not lead them to realize it was Jesus all along walking and talking to them. How is this possible? Here we have actual recorded evidence on Jesus, yet it did not help reveal Jesus to the disciples.  It was only when He blessed bread, broke it and gave it to them that they realized Jesus was there.

Does this sound familiar?  If you guessed the Last Supper or the Holy Eucharist, you are correct.  It is only when Jesus has Mass and gives the Eucharist, His body and blood under the appearance of bread and wine that the two disciples realize He is there.  Jesus is truly present in the Holy Eucharist. This is not a symbolic gesture Jesus did or a repetition of the Seder meal. When Jesus said "This is my body," He literally meant it. This is why it pains me when I read on social media people's comments regarding Communion and the spread of Covid-19 Coronavirus. They insinuate that this virus can spread via Jesus' body and blood. What a disrespect!  While the Eucharist appears as bread and wine on the outside, the substance is literally Jesus Christ.  Ask yourself: Would Jesus allow this to be a conduit for spread of disease?  To suggest that we should stop Communion or change reception of it because of a virus is a lack of faith and an affront to Christ's presence in the Blessed Sacrament.  Hopefully the closure of churches and chapels will foster a greater desire and love for the Eucharist. I pray that when the churches reopen that they will be filled with people desiring to feel the sweet bread from heaven in the mouths.  It is only in the Eucharist where we truly discover Jesus. Scripture prepares our hearts with the burning just like it did with the two disciples, but the bread is what opens our minds, eyes and hearts to the realize that Jesus is present there.  O Sacrament most holy! O Sacrament divine! All praise and all thanksgiving, be every moment Thine!

Thank you for reading and for your comment. All comments are subject to approval. They must be free of vulgarity, ad hominem and must be relevant to the blog posting subject matter.